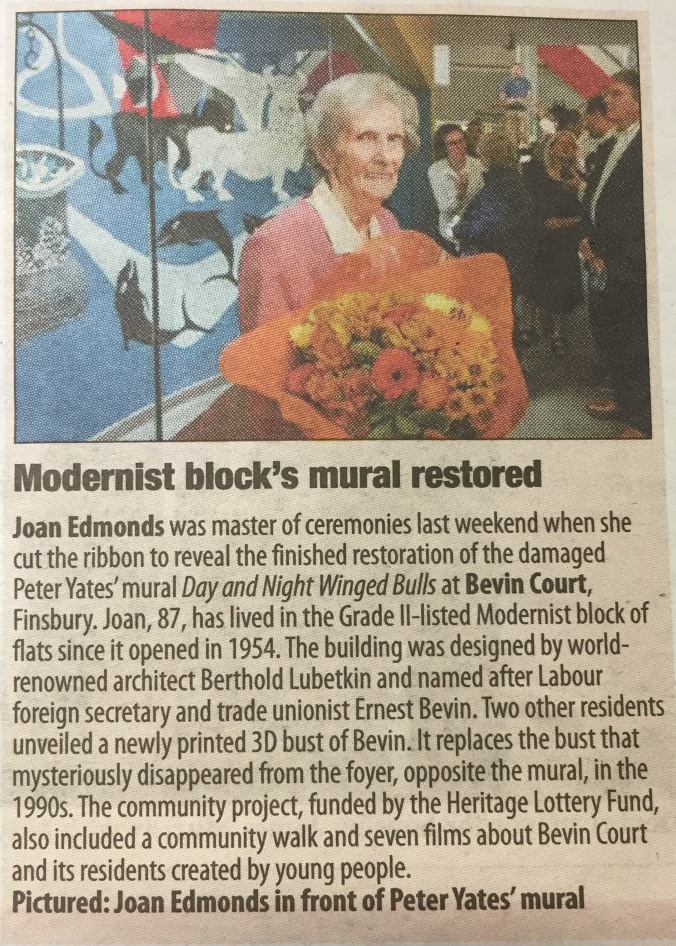 Recently funding has been secured to put deterrent paving in a sheltered but open part of Bevin Court’s south wing, known as the “sunbathers” area. The plan is to lay a spiky concrete surface there that is designed to stop people sleeping rough, or even sitting down. I know that some residents support this scheme, but I’d like to put some arguments against, because I think it needs some debate:

1. It won’t work to prevent drug use and public urination and defecation

If paving is installed to deter sleeping and sitting in the “sunbathers” area, it only makes it more likely that this space will then be used as a public toilet. It remains partially concealed, and because now by design it will not be possible to linger there, becomes instead an ideal location to squat and inject, or to roll spliffs, or to urinate and defecate. So the proposal as it stands will make this public health issue worse.

2. It discriminates against most vulnerable in society

The space is used by a variety of people, most of whom do no harm. Young people use the space as a social area to sit and talk. This generally takes place peacefully, and is their right. Public space exists for all of us, whatever our age, interests, income or housing status. Mild inconvenience caused by others is one of the prices we pay to live in the heart of a big city.

Sometimes homeless people do sleep there.  They do this not out of a malign desire to upset the good folk of Bevin Court, but because they have nowhere else that they feel is safe to use. Bevin Court presents them with a relatively safe and peaceful place to shelter. I have been told that a few rough sleepers have refused support from the council homelessness teams.  We should accept that homeless people are living chaotic and complex lives, and often suffer from severe mental health issues, and respect their choice when they say they do not feel safe in institutionally provided care. I find it sickening that some of us living here –  with homes, incomes and stability in our lives  – regard these highly vulnerable people with such hostility.
The young,  the homeless,  people with drug and alcohol problems, are all like the residents, human beings and worthy of our respect. They are being spoken of in the proposed scheme as if they were somehow of less value. We treat the local foxes with more respect.
Yes there are sometimes loud people using Bevin Court at night, some in Holford Gardens, even some using the area for which the deterrent paving is proposed. But this is the nature of urban life.  If people are committing crimes, that’s what the police are paid to deal with. The paving will just shift the disruption a few yards away to the park and Holford Way.
*

3. At best the proposals will only displace the problem of the homelessness, litter,  and noiseThe proposal merely displaces rather than solves problem. John is an excellent caretaker and I am very sorry that he has to deal with human excrement and drug detritus. For his sake I suggest that the council should send in specialist contractors to deal with this instead.  But as the proposals stand, someone will unfortunately still have to clear up the faeces, urine and needles, because the plans do nothing to fix the problems of homelessness or drug use. It may move the issue a few yards down the road but that is not a solution. Deterrent paving isn’t going to solve the complex matrix of economic, social and medical problems that have given them such a vulnerable and difficult lives. I can only imagine how degrading it must be having to defecate in public when there is no other option. Perhaps the council could provide public toilets instead?

Syringes appear in neighbouring Holford Gardens as well – would the solution be to close the entire park to everyone as a preventative measure? Of course not. Addiction should be treated as a medical not a criminal matter. If the council wanted to address problem drug and alcohol use it would be more humane and effective to offer safe spaces for addicts – shooting galleries as seen in more sensible European countries. Knives may occasionally  be disposed of there – if we put the paving down is this going to do anything to reduce knife crime? Of course not. You’ll just get the same knives being thrown away in the nearby flower beds.
A series of hyperbolic assertions are being made about crime and antisocial behaviour that simply have no evidential basis. In fact this estate is peaceful and safe in comparison to any other I can think of in central London.
*
4. It makes a disgusting statement
.

If there was a proposal for an alternative use for the sunbather space that would serve the community I would support it.  But what is proposed offers no new use for the space, it just intends to deny its use to people that are arbitrarily categorised as undesirable. Otherwise the deterrent paving is just an ugly statement of our lack of compassion: “we might have no use for this space, but if you’re homeless, or young, or just wanting a quiet corner to sit in – you’re not welcome in our society!” It’s a vile attitude and it shocks me that public funds are to be spent on it.

I’d previously put the contact details for the council officer responsible for this project, so that you could give her your views on the matter. She’s asked for them to be removed as there will be a consultation in due course – the time to listen is apparently not now. It’s nice to know council officers read these posts and that they really are working for the communities they’re employed to serve!

Sunday 23 May 2016, a year and a day to the day we launched the Bevin Court Community Restoration project, we were able to unveil the brilliant outcomes to everyone.

We were lucky enough to have a great team on hand to help with all the arrangements for the afternoons celebrations. Julia, Carol, Sue and Nancy and many other residents were enthusiastic in taking care of all the victualing and organizing. I think you’ll agree that it looks like a great spread.

Julia had the great idea of making a cake with a picture of the mural on it. It worked so well that she made two…and some cupcakes with bulls heads to boot!

John Allan kindly introduced the audience to the topic and after a few thanks from Julia Barclay (Chair of the TRA and the main reason the project ever got off the ground) and Alex Smith (Project coordinator) we passed proceedings onto one of only two remaining original tenants of Bevin Court.

Joan Edmonds was kind enough to unveil our beautifully restored mural  Day and Night, Winged Bulls by Peter Yates. Joan has lived in Bevin Court since 1954 and has many fantastic memories about the place. You can listen to Joan and Carol, another original Bevin Court resident, recalling memories of the past 60 years in one of our oral histories.

We all got a chance to watch the great films that our young film makers made for us last summer. And even the community police got a bit of a break when they popped by to support the celebrations and have a piece of cake. We were thrilled to have Jolyon Yates, Peter Yates’ son, with us for the celebrations. The family have been indispensable in figuring out the complex history of the mural and it was brilliant to have him attend.

We were sad to be missing some of the most important people from the occasion: the conservation team. They had quite deservedly gone on holiday, so we will have to pass on our greatest thanks to them for enabling us to unveil a truly remarkable mural, restored to its former glory by a brilliant team.

During London Architecture Festival join Heritage England’s Elain Harwood for a talk at Islington Museum. Elain has a passion for post-war architecture in England, writing England: A Guide to Post-war Listed Buildings and Space, Hope and Brutalism: English Architecture 1945-1975.

Elain Harwood’s talk will put the architecture of Berthold Lubetkin’s Bevin Court back into the context of the post-war landscape in England.

When: Thursday 2 June at 6pm

This special talk is taking place as part of the Bevin Court Community Restoration Project and the London Architecture Festival. Take a look at some of our other events.

As part of London Architecture Festival 2016, join Berthold Lubetkin’s biographer, John Allan at Islington Museum for a fascinating talk about Lubetkin and Bevin Court. Find out more about the building of the iconic Bevin Court, the different schemes Lubetkin imagined for the site and their development into the structure we know and love today.

When: Thursday 9 June at 6pm

This special talk is taking place as part of the Bevin Court Community Restoration Project and the London Architecture Festival. Take a look at some of our other events.

Join us at Islington Museum Saturday 4 June at 2pm for a special screening of Utopia London for London Architecture Festival 2016.

Director, Tom Cordell, takes a journey in film through the city he grew up in, meeting the architects who designed it, and reuniting them with the buildings they created including some of Finsbury most famous landmarks including Finsbury Health Centre and Bevin Court.

When: Saturday 4 June at 2pm

This special screening it taking place as part of the Bevin Court Community Restoration Project in London Architecture Festival. Take a look at some of our other events.

Bevin Court is a Grade 2* listed building designed by Berthold Lubetkin in Islington. This website explores all things B. C.

Our Community
Our History
Our Projects